Meet the new Young Bond Girl in SHOOT TO KILL

The official Young Bond website has revealed the new Young Bond Girl from Steve Cole's Shoot To Kill. Boudicca "Boody" Pryce will be joining young James in action in Hollywood in the novel due for release in the UK on November 6 . 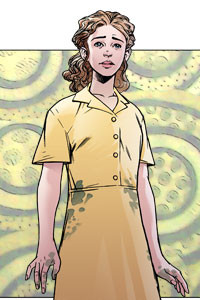 Boody is a 16-year-old pupil at Dartington Hall – beautiful, clever and go-getting, with a particular interest in machines and engineering. Her analytical mind is balanced by a perceptive, sensitive nature.

‘I’ve seen you about, new boy. You stay quiet. Keep in the background. But you’re always watching. It’s as if ... you’re expecting trouble.’ Old habits die hard, thought James, with a pang of unease at her scrutiny.

Pre-order Shoot To Kill from Amazon.co.uk.
Posted by John Cox at 2:38 PM