In 1982 James Bond fans in the U.S. received the latest issue of BONDAGE (No. 11), the magazine put out by the James Bond OO7 Fan Club. The cover said it all. Bond was back in two new adventures, For Your Eyes Only and License Renewed, and both heralded a return of Ian Fleming's original conception of James Bond. Everything about this cover screamed "new era." Even the magazine's masthead was new.


Of course, License Renewed found the literary James Bond back in action in the first original adventure since 1968. But For Your Eyes Only also marked the return of Fleming's Bond in film. FYEO was a radical tonal downshift from Moonraker, and the first Bond film in many years to use core story elements from the original stories (in this case a fusion of For Your Eyes Only and Risico).

Even the image of Bond and Melina tied together was a dramatic throwback, and it's no doubt why it was used on the cover. Just seeing a wound on Roger Moore's Bond was unprecedented. It was like snapping back to the pulp covers of the 1950s Fleming novels, especially Live And Let Die from which this scene was taken. 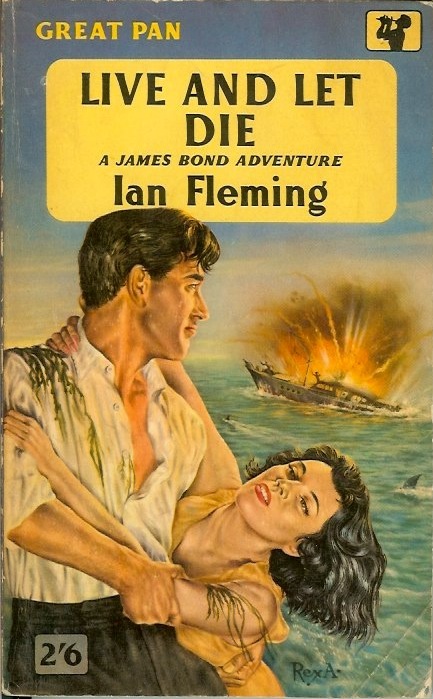 BONDAGE was a superb publication. This was due to the steady hand of Richard Schenkman, who ran the American fan club from 1974 to 1989. Richard had good relations with Eon and Glidrose and experience in the film business himself, so reporting in BONDAGE was remarkably accurate and insightful (his interview with Cubby Broccoli in issue No. 5 is a must read).

In this issue Richard introduced us to the new Bond author in a profile titled "John Gardner: A talk with the man holding James Bond's literary license." With the worlds of the book Bond and film Bond seeming to come together , you couldn't be faulted for thinking that License Renewed might be made into a movie, and this is addressed in the article. The reactions from both Broccoli and Gardner are revealing:

At time of publication of License Renewed, Cubby Broccoli would only talk about For Your Eyes Only, and say that his next film would be Octopussy. He said he wasn't securing an option on License Renewed, but then he doesn't have to since he already has automatic first refusal rights on any such Bond material. So the possibility always exists that Eon Productions or some other company would want to film the novel, especially since it has gone on to become such a publishing success. Would Gardner like to be involved in the production of that movie? "No. I'd be glad to have it filmed, but I don't want to be involved, thank you very much. I'd like to see the finished product…I'm a writer of fiction, and it occupies a vast amount of time. Working with movie people is an all-embracing, time consuming job and I haven't got time to be involved in that sort of thing. Sure, if the movie was made and they did a special paperback issue to coincide with the release of the film and they wanted me to go out and promote it, I would. But this is highly unlikely. They've got movie stars to do that."


Of course, the Gardner books never made it to the screen. And while Octopussy was an "all time high" for Eon, the productions began to struggle with their stories after 1983. It's too bad the Gardner books weren't adapted in the proceeding era. In retrospect, Timothy Dalton's Bond might have been better served with cinematic versions of License Renewed, For Special Services, and Icebreaker.

But maybe that's just me remembering a time when it seemed anything was possible.

Watch for my Bibliography of "15 Years of Bondage" coming soon to The Book Bond.
Posted by John Cox at 10:44 AM