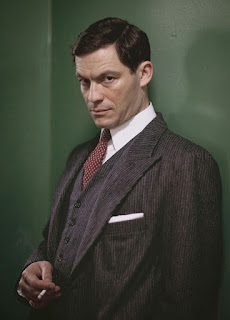 Along with the revealing of the UK cover art, IFP and Vintage announced today that actor Dominic West will read the unabridged UK audiobook for Solo, the new James Bond novel by William Boyd due out next month.

"We are thrilled to have such a distinguished actor as Dominic West reading Solo,  says Richard Cable, Managing Director, Vintage Publishing. "It’s the perfect combination of reader and text. Audio listeners are in for a real treat!"

The 43-year-old West was actually one of the actors in serious contention to play James Bond #6 back in 2005. Here's a shot of him looking amazingly like Ian Fleming's James Bond.

The Solo UK audiobook will be released the same day as the hardcover edition, September 26, 2013. You can pre-order it now on Amazon.co.uk.
Posted by John Cox at 2:00 AM