Today I take a look back at the intermittent history of James Bond comic film adaptations.

Doctor No (1962)
The first American comic book to feature James Bond was originally drawn for the British Classics Illustrated series. It was reprinted in the U.S. as part of DC’s Showcase series to tie-in with the first James Bond film. The story was censored, deleting all racial skin color and dialogue thought to be demeaning. The 32-page comic follows the movie script and most of the characters are drawn to resemble their screen counterparts. It was also published in Greek and Swedish editions.

For Your Eyes Only (1981)
After a mysteriously long absence, 007 returned to U.S. comic books in an adaptation of the 1981 James Bond film For Your Eyes Only starring Roger Moore. Marvel Comics published FYEO in three versions: a two issue comic book, a magazine, and a mass market paperback which Marvel called an “illustrated book.”

Octopussy (1983)
Marvel once again adapted the new Bond film Octopussy into a comic book, but this time it was only available in magazine form. The artwork by Paul Neary and layouts by Rita Cilia are excellent, maybe the best of all the Bond adaptations. It was also adapted in Scandinavia with original artwork, so Octopussy is unique for having two comic adaptations.

A View To A Kill (1985)
The 15th James Bond film and the last to star Roger Moore was adapted as a comic in Scandinavia and Germany where it appeared as a trade magazine edition.


The Living Daylights (1987)
The Bond film that introduced Timothy Dalton was also adapted in Scandinavia. A nice bonus here is that it features the “flying carpet” sequence cut from the final film.


Licence To Kill (1989)
Eclipse brought Bond comics back to the U.S. with an adaptation of Licence To Kill by Permission To Die author Mike Grell. Published in a magazine size hardback and paperback, it’s been said that Timothy Dalton would not allow his likeness to be used, so a more generic Bond was used. 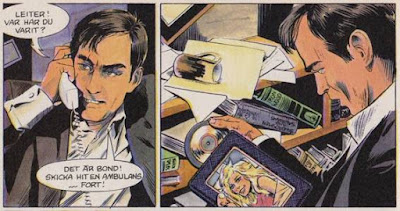 GoldenEye (1996)
Topps adaptation of the 1995 Bond film GoldenEye, which introduced Pierce Brosnan as 007, was originally meant to be in 3 parts, but only issue #1 ever appeared. A lengthy delay in getting approval for the racy illustration on the cover of issue #2 led to the series being cancelled prematurely. Topps was reportedly going to launch an ongoing series of original 007 adventures following publication of GoldenEye, but this also never materialized. GoldenEye marked the end, at least to date, of the James Bond film comic adaptations. 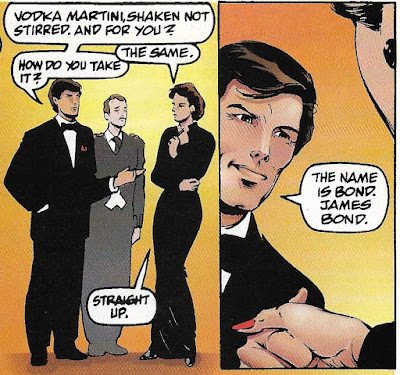