Next Bond film is NOT based on DEVIL MAY CARE 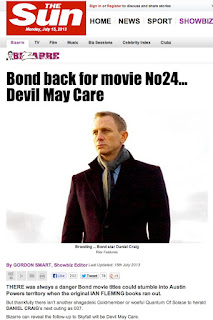 Over the weekend The Sun ran an article by Showbiz Editor Gordon Smart claiming that the next James Bond film, Bond 24, will be based on Sebastian Faulks' 2008 continuation novel, Devil May Care.

"Bizarre can reveal the follow-up to Skyfall will be Devil May Care. Brit SEBASTIAN FAULKS penned the novel of the same name in 2008 to mark the 100th anniversary of Bond creator Fleming’s birth. The book is set in 1967 and was a sequel to The Man With The Golden Gun — which was ROGER MOORE’s second outing for MI6. The story sees Bond battling an evil chemist called Dr Julius Gorner, who plots to bring Britain to its knees."


While it isn't IFP's policy to respond to rumors, I can confirm for you that this "scoop" by The Sun is complete and utter rubbish. Bond 24 is NOT based on Devil May Care.

The good news is Sam Mendes will return to direct the next 007 adventure from a script by John Logan. That's the creative team responsible for last year's amazing Skyfall. Daniel Craig will, of course, return as James Bond.

UPDATE: Happy to see my little post here has been picked up by Filmoria with a nice credit.
Posted by John Cox at 8:46 AM