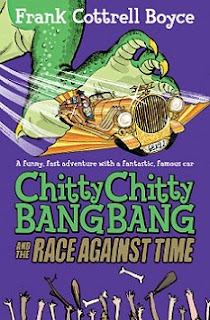 The second sequel to Ian Fleming's Chitty Chitty Bang Bang is released today in the UK.

From the cover art, it appears the traditional Chitty car is back. In the first book the engine of Chitty inhabited a magical VW Bus.

Purchase Chitty Chitty Bang Bang And The Race Against Time at Amazon.co.uk.