Raymond Benson and Jeffery Deaver team up for ICE COLD 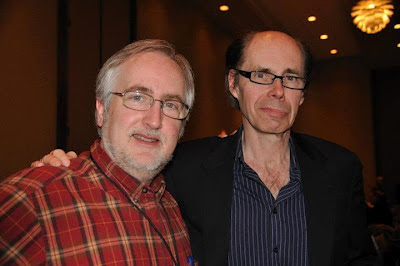 Bond authors Jeffery Deaver and Raymond Benson have joined forces and will be editing a new Mystery Writers of America anthology of short stories called, ICE COLD: Tales of Mystery and Intrigue from the Cold War. The book will be published in 2014. Here is the press release announcing the project.

Centered on the Cold War, this book will let our members unleash their own interpretations of a tense and scary era in history. Raymond and Jeff will each write an original story for this exciting anthology and have invited other top MWA members to do so as well: Joseph Finder, John Lescroart, Laura Lippman, J. A. Jance, T. Jefferson Parker, Sara Paretsky, Katherine Neville, and Gayle Lynds with John Sheldon.
Ten new stories will be selected by an expert MWA panel from a pool of blind submissions by our current members. Members in any category of membership may submit stories -- you do not need to be previously published, but you must be a member in good standing (dues paid).

Please consider joining these ten outstanding authors in this exciting venture. Stay within the theme, and send in your story by February 1st for consideration by our panel of judges. Here is the final title and theme for this thrilling project:

Ice Cold:
Tales of Mystery and Intrigue from the Cold War
Edited by Jeffery Deaver and Raymond Benson

“Spies. Femme fatales. Shady diplomats. Covert meetings in foreign cities. Nervous political leaders. Nuclear threats and brinksmanship. Paranoia. The Cold War had all of these and much, much more. The frigid time between 1945 and 1989 was a real-world maze of dead drops, double (and triple) agents, and clandestine meetings—and betrayals.
Sharpen your writing instruments to pen stories set during this terrifying time, when war between the superpowers was a frightening possibility that could be jump- started at the touch of a button. The Cold War background lends itself to a variety of stories—mystery, thriller, pulp, noir—each one highlighting the danger and fear that stalked secret agents, reporters, or even everyday citizens. So flip up the collar on your trench coat, and make sure you aren’t being followed as you step into the shadowy world of the Cold War.”