The promotional machinery in the UK has begun to churn for the release next Thursday of Solo, the new James Bond novel by William Boyd.

The Times has published a feature article about the author along with the first extract from the book. Unfortunately, the online version requires a subscription so I haven't been able to read it. But if you have a Times subscription then CLICK HERE and enjoy your first taste of Boyd's Bond!

One bit of information that has emerged via a report in the Mail Online is that Bond will be driving a Jensen in the new book. The Mail reports:

"Boyd said he felt his style matched the sentiment of the original Bond books - although he accepted that some hard-core 007 fans might be disappointed with his decision to tweak the original writer's style, even having his spy drive a Jensen rather than a Bentley or an Aston Martin."


This hardcore 007 fan is not at all disappointed. I love it when an author changes up Bond's car. (Saab anyone?) And I think a Jensen is an excellent good choice given the period (the book is set in 1969). I'm not sure exactly which make and year Bond's Jensen will be. Below is a 1970 Jensen FF. 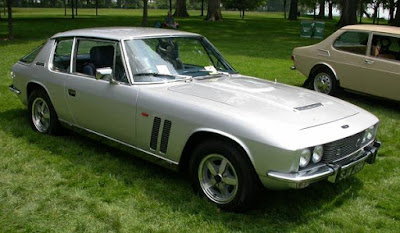 Another piece of leaked info:

UPDATE: Bond's car in Solo is a Jensen FF Mark I:


"Bond felt he was in a low flying plane rather than an automobile as he accelerated the Jensen.... If you needed a car to boost your ego, Bond thought, then the Jensen FF would do the job admirably." - Solo