With all the new Ian Fleming reprints and the 50th Anniversary books hitting shelves in the next few months, the book that I am actually most excited about is Ian Fleming: The Bibliography by Jon Gilbert. Now at last we have a release date and details about this major publication from Queen Ann Press.


A comprehensive 750-page guide to the work of Ian Fleming, one of the 20th Century’s greatest thriller writers and creator of the world’s most famous spy, Special Agent 007. Covering everything from the first draft of Casino Royale in 1952 to editions still in print today, Ian Fleming: The Bibliography is not only an indispensable source of information for collectors, enthusiasts, libraries and booksellers alike, but an entertaining and informative volume that will appeal to anyone interested in the James Bond phenomenon. The guide will be published in Late October 2012 by Queen Anne Press – the literary impress once managed by Ian Fleming.

Author, Jon Gilbert, is the foremost expert on the works of Ian Fleming. He has worked for rare book experts Adrian Harrington Limited since 1990 and is an internationally renowned expert in James Bond material. 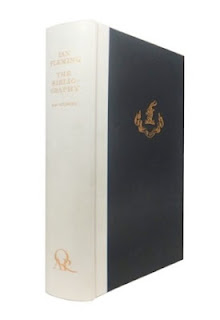 Jon says: “Ian Fleming is best known as the creator of James Bond, an icon of 20th century popular culture, but he was also a journalist, publisher, travel writer, motor enthusiast, card player, accomplished golfer and noted bibliophile. Much has been written about Fleming and his legendary creation, but until now there has been no serious bibliographical account of his published work.”

Jon’s research took him to the Jonathan Cape Publishing archive, Eton College Library, the Pan Macmillan archive, Penguin Books Ltd., The Imperial War Museum's Fleming Exhibition, the British Library and the 'Bond Bound' display at The Fleming Collection, London. In addition he has been able to interview colleagues, friends and family of Ian Fleming. He came across many interesting and little- known details, all of which are included in the bibliography. The result is not just a collection of literary facts and figures, but a fascinating insight into the career of one of Britain’s most famous authors.

Apart from the fourteen Bond novels there are sections covering Fleming’s non-fiction works The Diamond Smugglers and Thrilling Cities, his book for children Chitty Chitty Bang Bang, plus his more obscure articles, essays and contributions. Each main entry includes an engaging narrative on the conception, editorial process and marketing of the book, complemented by a full list of sources. Biographies of Fleming's closest confidants are provided, along with a detailed chronology of the author's life.

 The work has been compiled with the approval of Ian Fleming’s literary estate and the assistance of the Ian Fleming Foundation. As Kate Grimond, Ian Fleming’s niece explains: “Queen Anne Press's first publication in its revived form was the complete works of Ian Fleming, 18 volumes in all including the 14 famous James Bond titles. We are delighted now to publish Ian Fleming: The Bibliography, a magisterial work which includes more than 1,000 illustrations and is a must for any Bond aficionado.”

 Fergus Fleming, Ian Fleming’s nephew and author of the Bibliography’s Preface, comments: “The result of four years’ intensive research, Jon’s book is a welcome reminder of just how important Ian Fleming’s works are and how deeply they have influenced so many people.”

The Book is available in two versions:

Available from Queen Anne Press and Adrian Harrington Ltd Website: www.queenannepress.com / Tel: +44 (0)207 229 0118 or via email from rare@harringtonbooks.co.uk
More information can be found on the official Facebook page.