The next two John Gardner James Bond reprint from Orion have been released in the UK. No Deals, Mr. Bond and Brokenclaw are now shipping from Amazon.co.uk. 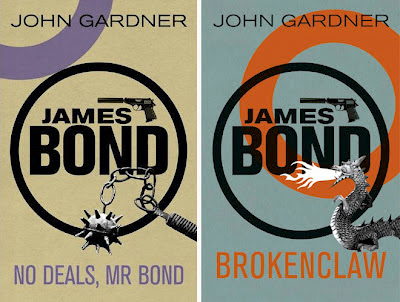 That's right, I said Brokenclaw. For whatever reason, Orion has jumped the release of Brokenclaw ahead of Scorpius, Win Lose or Die, and Licence To Kill. I'm not sure why, but I'm not complaining. I've always considered Brokenclaw to be one of the most underrated of all the Gardner Bonds. In fact, I think it's the best of his later books.

The next wave of five Gardner releases will be on August 2. Visit our special Gardner Renewed page for links and release date updates for all the Gardner-James Bond reprints in the U.S. and UK.
Posted by John Cox at 7:52 AM