Was the release of WIN, LOSE OR DIE delayed in the UK?

This morning I was trying to nail down the release dates of the John Gardner James Bond novels in the UK (to update this article) when I stumbled on this item from an issue of OO7 Extra (No. 6). Win, Lose or Die was originally announced for release in July 1989, but this reports a postponement until January 1990. Maybe to avoid competing with Gardner's Licence To Kill novelization?

So did this delay happen? While the publication page says 1989, it's still possible they held back the actual release until January 1990. I do recall having trouble getting a UK Win, Lose or Die from my usual source here in the U.S., The Mysterious Bookshop, who didn't have copies in the summer of 1989.

In fact, I wasn't able to track down a UK Win, Lose or Die until summer of 1990 when I found a copy in Canada. I remember being surprised that I could still find a brand new hardcover on a display table a year after its release. Of course, if it was delayed, this explains that. A delay might also explain why this book is especially hard to find signed.

So I'm throwing out the question to my friends in the UK... Anyone recall exactly when Win, Lose or Die hit bookstore shelves? It would be nice to solve this mystery. 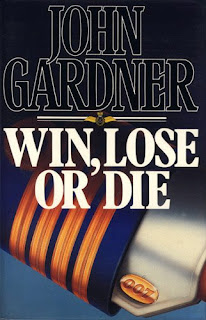 UPDATE: Glidrose over at the CBn forums has found a citation for a review of Win, Lose or Die in the Canadian Globe and Mail on July 22, 1989. So it appears it came out in July '89 as planned.
Posted by John Cox at 11:55 AM