THE JAMES BOND LEXICON promises a comprehensive look at 007 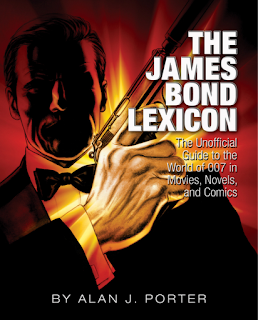 I've pretty much stopped buying books about the James Bond phenomenon, but I WILL be picking up The James Bond Lexicon: The Unofficial Guide to the World of OO7 in Movies, Novels, and Comics by Alan J. Porter when it is released by Hasslein Books in late 2012 or 2013.

This looks like it's going to be more in lines with Raymond Benson's classic The James Bond Bedside Companion or Simpson & Lane's The Bond Files in that it will cover the entire Bond phenomenon in books, films, and comics. It's been a long time since we've gotten a truly comprehensive reference book on 007 (one that doesn't limit Bond's entire history to twenty-something films), and the word "unofficial" doesn't trouble me one bit. In fact, I see that as a plus. Really looking forward to this.

Thanks to Anders Frejdh and his awesome From Sweden With Love website for the tip. You can follow the latest on this book at The James Bond Lexicon on Tumblr.
Posted by John Cox at 11:17 AM