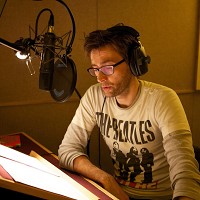 PRESS RELEASE: The British actor David Tennant has been chosen by the family of Ian Fleming as the voice of fiction’s most famous flying car, Chitty Chitty Bang Bang. David has recorded the audiobook of Chitty Chitty Bang Bang Flies Again, by Frank Cottrell Boyce, which will be available to download in time for Christmas.

The original Chitty Chitty Bang Bang was written by James Bond creator Ian Fleming and Frank Cottrell Boyce’s version, published in October by Macmillan Children’s Books, is the first official sequel to the original tale of a magical flying car.

Lucy Fleming, niece of Ian Flemings, says: "We are thrilled that David agreed to read the audiobook. He is such a talented actor and his voice brings Frank Cottrell Boyce’s story to life with a wry humour and great characterisation. Chitty could not have been in safer hands with him behind the wheel! We hope that this audio book will add some extra sparkle as families embark on their own magical adventure this Christmas."

The audio download will be accompanied by an interview between Lucy Fleming, and David Tennant. In the interview he said: "The idea of a flying car is hard to better. I think we would all love to have a car that would take off, escape the traffic, and fly you to any country in the world."

Also in the interview Lucy Fleming and David Tennant pick up on the James Bond connections cleverly woven in to the story by Frank Cottrell Boyce. However neither reveal where they can be found, with Lucy adding how much fun it is for people to find them themselves. When asked if he could sum up Chitty in three words, David said it was "very clever, slightly surreal and hugely readable."

The audiobook will be available from the online retailers Audible and iTunes just in time for Christmas as an exclusive download from 21 December 2011 priced £10.99.

Since the publication of Chitty Chitty Bang Bang Flies Again readers of all ages have been entranced by the family story, filled with wonderful characters, terrifying villains and exotic far-flung lands.
Posted by John Cox at 5:06 PM