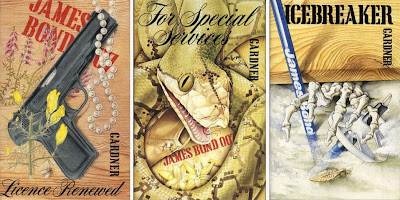 The first three hardcover reprints of the classic John Gardner James Bond novels are released today by Swordfish/Orion Books. The titles are License Renewed (first published in 1981), For Special Services (1982), and Icebreaker (1983). The books each feature their beautiful original cover art (above). The cover for License Renewed is done by Richard Chopping, who provided covers for many of the Fleming titles.

Rowland White, Non-fiction Publishing Director and Publisher of Swordfish says: “As I grew up in the 1980s, John Gardner’s Bond was, to a large extent, my Bond. I missed out on the chance to anticipate the publication of a new Bond from Ian Fleming. Instead I looked forward to my next fix of 007 from the hand of John Gardner. It’s a huge pleasure and privilege to now have the opportunity to publish new editions of these classic thrillers on the Swordfish list.”

Corinne Turner, Managing Director of Ian Fleming Publications Ltd said “We are delighted that the 30th anniversary of the first Gardner Bond novel is being celebrated with such a lovely edition. I can’t imagine a more fitting tribute to one of our longest serving and most dedicated Bond authors.”

Simon Gardner, the author's son, said "My father, John Edmund Gardner, was extremely proud to have been asked to take on the role of Bond continuation novelist, and if he were alive today he would be overjoyed to see his Bond novels back in print for a new generation of fans to enjoy. On behalf of the family, I would like to say how pleased we all are that The Orion Publishing Group are re-printing these first five novels, complete with their original jackets. It is very exciting that these will be released under Orion's new imprint, Swordfish. We all find it hard to believe it is the 30th anniversary of the publication of Licence Renewed."

Personally, I'm extremely excited about the release of these books. I also grew up with Gardner's Bond. I can recall when and where I got every book, and who I was at the time. The Gardner books are really what made me such a fan of the literary 007. I also lobbied for 30th Anniversary editions, so this is a dream come true. I'm thrilled that younger fans can now rediscover John Gardner's James Bond for themselves.

Orion will release Role of Honor and Nobody Lives Forever in July. They will then release a Box Set of all five hardcover reprints in November, and then ALL the John Gardner James Bond novels in paperback with all-new cover art throughout 2012 and 2013. For the full release timeline, visit our special Gardner Renewed page.