Just for fun, here's an advert from 1984 for John Gardner's fourth James Bond novel, Role of Honor. I believe this appeared in Publisher's Weekly. At the time it was thought Gardner was going to take a year break after his third Bond novel, Icebreaker, so the announcement of a new Bond book for 1984 was a great surprise! 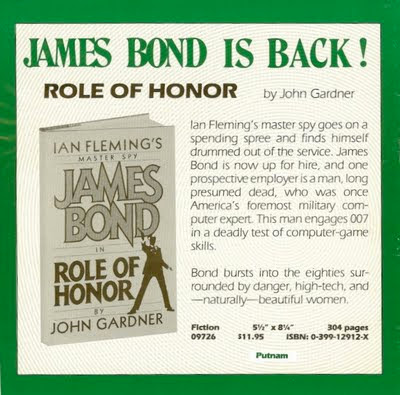 Role of Honor will be released on July 7 as part of the Orion's special re-issuing of the classic John Gardner James Bond titles to celebrate the 30th Anniversary of License Renewed.
Posted by John Cox at 4:57 PM