CARTE BLANCHE extracts in The Times 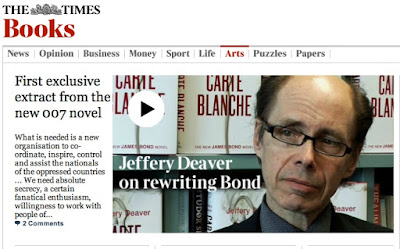 There is a major extract from Jeffery Deaver's Carte Blanche in today's The Times. According to chatter on the CommanderBond.net forums, the first two chapters are extracted and they are getting an enthusiastic thumbs up.

The book starts with Bond on a surveillance mission in Serbia. The opening chapter represents the thoughts and concerns of the drivers of a Serbian Rail freight locomotive loaded with drums of the chemical that killed people at Bhopal.

"...and so at ten o'clock last night, the rangy tentacles of these events had reached out and clutched Bond..."

There will be further extracts in The Times on Monday and Tuesday. They can be read online behind a £1 paywall.