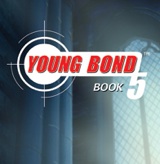 If you look closely at the artwork for the U.S. paperback edition of Hurricane Gold and the new By Royal Command, you’ll notice the publisher has decide to create a slightly different title treatment for the series’ covers.

The familiar red band has been narrowed and the title enlarged. Also, the Young Bond logo has been changed from blue to red, and instead of spelling out Book Four (in rather hidden type) the number assignment is now emphasized with a large numeral. The book’s spine also receives a sleek new look.

Now Disney confirms that the first three Young Bond novels, SilverFin, Blood Fever, and Double or Die will get this same title makeover when they are reprinted (Kev Walker’s art will remain unchanged). There’s no set release date for these reprints, but start watching for them around the time By Royal Command hits store shelves on May 18, 2010. 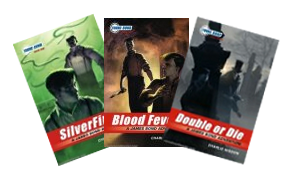