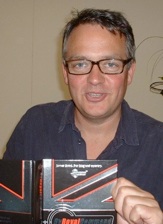 In an interview with Mi6.co.uk, Charlie Higson revealed a very unusual marketing concept that was proposed for his fifth Young Bond novel.

“Originally, the publishers came up with this idea to call the book Diamond Heart, or Diamond something, and the hardback would have an inset diamond in each cover. The diamonds would really be plastic or crystal, but one copy would have a real diamond on the front. But I said to them, 'look, this is a purely marketing and cover design-lead title idea, and it really doesn't have anything to do with the contents of the book.' So we sent them away to rethink that.”