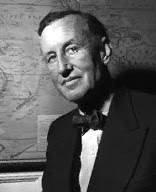 The Historical Dictionary of Ian Fleming’s James Bond retails for $80 and can be pre-ordered at Amazon.com.
Posted by The Book Bond at 9:26 AM