James Bond: The History Of The Illustrated 007 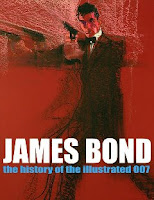 Now for the first time, the complete history of the illustrated James Bond is chronicled by pop culture historian Alan J. Porter in James Bond: The History Of The Illustrated 007. Porter’s new book examines James Bond’s adventures in newspaper strips and comic books.

Before Bond became world famous with his movie series, the character was the subject of successful English newspaper strips and later in comic books. With the explosion of Bond on the screen the character and his exploits become even more popular in comic strip and comic book versions all over the world. James Bond: The History Of The Illustrated 007 examines it all, and covers Bond’s newspaper strip and comic book appearances from the 1950s to the present.

Amazon.com
Amazon.co.uk
Posted by The Book Bond at 2:35 PM

Email ThisBlogThis!Share to TwitterShare to FacebookShare to Pinterest
Tags: Comics