Publisher Disney Hyperion have posted on their website Kev Walker’s prototype artwork for the U.S. hardcover edition of Hurricane Gold, due for release April 7, 2009. This is a much larger image than what was revealed on the official Young Bond site back in June. 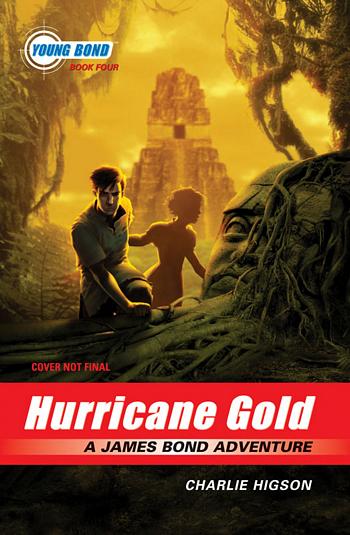 Mind you, this is not the final art (as it says on the cover itself). The final art will reflect the “Bond vs. Villain” theme as seen on Double or Die and the new paperback editions of SilverFin and Blood Fever due for release next year.

Still, this is beautiful work by Walker (who’s work can be seen in the new SilverFin Graphic Novel) and it’s nice to get a closer look. We hope to bring you the FINAL cover sometime this month.

The Hurricane Gold hardcover is available for pre-order on Amazon.com.
Posted by John Cox at 8:23 AM