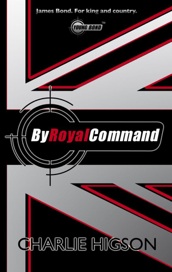 With By Royal Command

Charlie Higson brings the Young Bond series in for a picture perfect landing, touching down cleanly and evenly on every aspect of James Bond’s past and future life. Within its own universe, By Royal Command is the equivalent of 2006’s Casino Royale

or this year’s The Dark Knight -- a surprisingly profound, introspective, and ultimately tragic chapter that takes a leap in quality and maturity from all that has come before.

At the same time, By Royal Command is a kinder and gentler Young Bond novel that doesn’t have nearly the level of gruesome violence that has become a hallmark of the series (and may have actually gone too far in the last book). It’s an utterly surprising book in just about every way. Of course, all the Young Bond books have been individualistic and, in their own ways, surprises, so By Royal Command fits perfectly into a series that has never repeated itself.

By Royal Command is divided into three sections so distinct that it’s worth reviewing one section at a time.

PART ONE (“Kitzbuhel”) finds James Bond joining a school skiing party in the Austrian Alps. For my money, these pages contain Charlie Higson’s best work. Without much main plot to address, Charlie serves up an atmospheric slow burn. His descriptions of the Alps and his skiing details put the reader right into Bond’s snow boots. The reader is transported and even lulled into the beauty of the mountains. But then the clouds come in and so does the danger, and Charlie turns his skills toward creating a thrilling and frightening battle for survival. It’s brilliant and harrowing stuff. For those who have resisted the Young Bond series, read these first 100 pages and I guarantee you will pick up the entire series.

PART TWO (“Eton”) finds young James back at school in England, and here’s where the main plot and caper kicks in. For Fleming buffs, this is what they have been waiting for as we are finally introduced to the infamous “boys’ maid,” who Ian Fleming established in You Only Live Twice

as being instrumental in Bond leaving the school. Yes, By Royal Command gives us the full “maid incident” and, no, it’s not sexual (well, at least not on the page -- adult readers may be able to read between the chapters). Feisty Roan Power is a raven-haired Irish beauty who likens herself to a witch, and young James falls hard for the older woman (she’s 17). Despite saying he’d avoid romance in the Young Bond series for fear of putting off his young male readers, Charlie takes the plunge and gives us a full-blown love story in By Royal Command.

But it’s clear from the very first chapters that Charlie is not necessarily writing a book for kids, or at least he is asking more of his young readers. By Royal Command is full of sophisticated political and historical references, especially in this second section (Bond has a historically fascinating conversation with the Prince of Wales), and the plotting is an intricate web of spy intrigue. Far from being a turn off, I expect even the youngest readers, having invested in the first four books, will be rapt with attention, waiting for the next revelatory shoe to drop. But even if they ultimately opt for the eels of SilverFin, the pirates of Blood Fever, the puzzles of Double or Die, or the death mazes of Hurricane Gold, the mature themes of By Royal Command will certainly attract over time and provide a perfect bridge to a possible Young Bond Series II (please oh please).

Interestingly, the big caper in By Royal Command – an attempt to assassinate King George during a visit to Eton – is resolved near the end of this second section, which still leaves a good 100 pages to go. This is where By Royal Command takes its most surprising turn.

In PART THREE (“Fugitives”), James Bond resolves to do the wrong thing – bigtime. He follows his heart instead of his new SIS controllers, says the hell with King and Country, and uses all his formidable skills to help Roan – revealed to be a communist conspirator – escape to Europe. It’s here that By Royal Command becomes a wonderful NOVEL, throwing off all conventions of a typical James Bond book. It’s as exhilarating for the reader as it is for Bond to be freed of convention and plunge back into Charlie’s wonderful descriptions of the Austrian Alps, this time during a summer bloom (nicely symbolic). But danger is close behind, and Higson throws us a wonderful surprise twist in the form of a returning character that plunges Bond back into familiar territory for an exciting climax, where we finally get a generous helping of Young Bond gore (I knew he couldn’t resist).

As for the very end… I’ll leave it to the reader to discover. Suffice to say, I was able to brings tears to the eyes of a female friend by just describing it.

Structurally, By Royal Command is somewhat similar to Devil May Care

(the celebrated Centenary adult Bond novel by Sebastian Faulks), particularly in its post-caper third act flight. But By Royal Command has an emotional depth that the adult Bond adventure didn’t. There is a real sadness that permeates By Royal Command, a steady drip drip drip of Bond’s innocence, of which Bond is all too aware. After the bloody events of the past four books, especially the relentless Hurricane Gold, this James Bond wants nothing more than to live a normal schoolboy’s life. He’s a 14-year-old with post traumatic stress. (Ironically, the young Bond of By Royal Command is much more the damaged “old gunslinger” as described by Faulks.)

But Bond discovers he is fated to be a magnet for danger and death, and his reserves of stamina and strength in such situations have not gone unnoticed by leaders who soon need young men with such reserves. Not only does Bond lose what remained of his innocence in By Royal Command, it’s made clear to him that the world will soon lose what remains of its innocence as well. The specter of World War II and the Cold War looms large over this novel and, in the end, Bond is resigned that his will never be a normal life. In time, he will become a number.

Okay, what are the flaws? I’ll leave it to fandom to nitpick, but for me, I was never able to completely fall in love with Roan as I was past Bond girls. Maybe it’s because her calling James “darling” sounded to matronly. But this also contributed to the tragedy. Despite Roan’s own claims of love, Bond was clearly in a relationship that was one-sided. And after the last two books, some may find By Royal Command too light on gore and violence. But this is not a complaint I’d level. Like Blood Fever, I think this book strikes a perfect, realistic balance of all elements that make up a great James Bond novel.

So where does By Royal Command stand among the other Young Bonds? For me, it’s clearly the best -- which qualifies it as one of the very best James Bond continuation novels, period. For fans who still refuse to read the series based on the concept alone, it’ll be hard to justify why they won’t at least read By Royal Command, as it depicts a key event established by Fleming and IS a spy novel. While it’s preferable to have a knowledge of what came before (the book touches on all the past Young Bond novels with several returning characters), By Royal Command can still be read as a stand alone.

While there has been talk of more Young Bond adventures at some point in the future, Charlie makes it clear in his acknowledgments that By Royal Command is the end of a five book cycle started in 2005 with SilverFin.

What a spectacular end it was.
Posted by John Cox at 9:18 AM