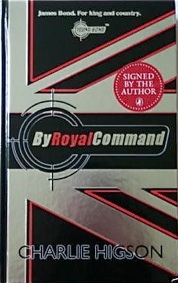 Young Bond fans and collectors will want to be on the watch for a By Royal Command “Signed & Numbered Limited Edition” that was released alongside the hardcover yesterday.

Charlie signed and numbered 2000 of these special editions for sale in independent bookstores. Aside from the signature and number stamp, the book is identical to the retail hardcover.

By Royal Command finds James Bond in action from England to the chilling heights of the Austrian Alps. The book completes Charlie’s five book cycle that began in 2005 with SilverFin.

Watch for my review of By Royal Command on Friday.
Posted by John Cox at 6:08 PM