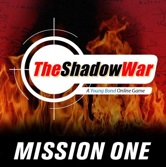 Something odd has happened at Castle Hellebore; there’s been a fire and some fishy goings-on...

Today sees the launch of the first mission of The Shadow War, the groundbreaking new Young Bond alternate reality game that can be played at www.youngbond.com.

Each week, for seven weeks, a new mission will appear on The Shadow War website, taking intrepid players through adventures in the world of Young Bond. You can play as either a British SIS agent or a Soviet OGPU spy. Missions will take up to an hour to complete and players can join and leave at any point, as well as change sides. At the end of each mission there will be a mission debrief before the next is set.

The game culminates on 8th October with a live event, hosted on the game site and featuring Charlie Higson.