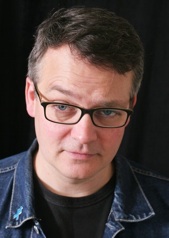 The Bond world has dominated the news this week with the announcement that Jack White and Alicia Keys will record the theme song for the upcoming 22nd Bond film, Quantum of Solace.

So what does Charlie Higson think about this? The Times has the scoop:

“Charlie Higson, author of the Young Bond novels and a self-confessed Bond junkie, said that the glory days of the stirring Bond tune were long gone. “There were five or six of them that were really fantastic in the early days, like Diamonds Are Forever, Goldfinger and You Only Live Twice, but I don’t think there’s been a true classic since Nobody Does It Better for The Spy Who Loved Me [in 1977].”

Of White and Keys, he said: ‘This pairing doesn’t sound that thrilling to me, but let’s not judge it before we’ve heard it. Think what they all said about Daniel Craig and look how good he turned out to be.”

To keep up with all the latest Quantum of Solace news, visit CommanderBond.net.
Posted by John Cox at 9:20 AM