BY ROYAL COMMAND is a wrap! 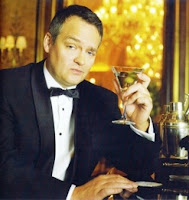 In a nice bit of serendipity, Charlie Higson tells us he has completed his fifth Young Bond novel, By Royal Command, on the same day the title was officially announced by Puffin and Ian Fleming Publications.

By Royal Command sees Young Bond in action from England to the chilling heights of the Austrian Alps. Charlie says this final Young Bond novel will be the most Bond-like in theme and scope. Publisher Puffin says the book “is meant to be the best one yet!”

By Royal Command will be released in hardcover on September 4, 2008.
Posted by John Cox at 9:48 AM