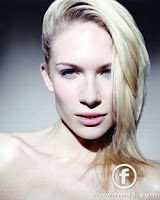 Penguin has revealed that the model featured on the cover of Devil May Care is Tuuli Shipster, daughter of a diplomat and muse of the British photographer, Rankin (whose subjects include Young Bond author Charlie Higson).

Tuuli began her modelling career at the age of 16 when she joined top modelling agency Storm. She is well travelled and has lived all over the world in countries including Russia, India and South Africa. Tuuli studied at Marlborough College and gained 5 A Levels in Russian, Politics, Maths, English, and General Studies. During her gap year she starred in a hugely successful advertising campaign for Pretty Polly which marked the beginning of her modelling career.

Campaigns with Arena, Cosmopolitan, Jitrois, Harpers Bazaar, Byblos Blu and a role in Richard Curtis' Love Actually followed. This encouraged her to pursue her fashion career as opposed to a life of academia. It was on a shoot for Elle Macpherson Intimates that she met Rankin and so began a professional partnership on many photographic projects - including a 40 page spread for German publication Quest and a book, Tuulitastic: A Photographic Love Letter - that has spanned three years.

Tuuli says: “I was thrilled that Penguin chose me to be their Bond girl. It’s fantastic to be involved with something so iconic.”
Posted by The Book Bond at 4:01 PM