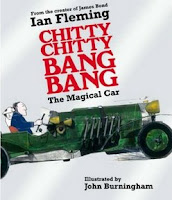 According to the always vigilant CommanderBond.net, a lavish new collectible gift edition of Ian Fleming's classic children's novel will be released on May 1, 2008, and can be pre-ordered now on Amazon.co.uk.

For those of you who didn't realize Chitty Chitty Bang Bang was written by Ian Fleming, it may also surprise you to know that the 1968 film version was produced by Eon Productions, the only non-Bond film the company has ever made.
Posted by The Book Bond at 11:00 AM