In a Q&A on Coming Soon.com, current James Bond star Daniel Craig was asked a question that many Bond fans have been asking for years. Namely, why doesn't Eon Productions adapt the James Bond continuation novels by John Gardner. His answer:

Craig: I don't think they ever would, because they don't own them. I don't know what the deal is with that. We're taking the original idea. The funny thing is if you read Fleming's (novels), which I try to plow through occasionally, there's an awful lot of story lines that have never been used because obviously the films are based on the books. There are still ideas that we can sort of pluck from.

Now, my understanding of the situation -- and, mind you, I may not understand the situation at all -- is that Eon Productions own ALL cinematic rights to the James Bond character and thus are the only producers who could adapt the Gardner books (or any continuation novel for that matter). However, to do so would require paying an additional fee for the story and, presumably, they'd rather not do that.

However, this hasn't stopped a great many of John Gardner's ideas from finding their way into the recent James Bond films. For a complete list of these surprising similarities, check out Deja Vu, Mr. Bond. 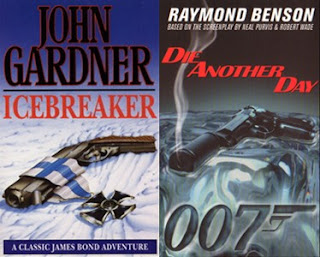