"A new start for YOUNG BOND in the states."

Today we have a wonderful exclusive. Young Bond author Charlie Higson has shared his reaction to the just released cover art for the U.S. edition of Double of Die. 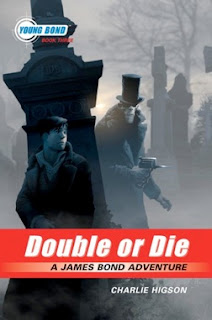 “When I started working on the Young Bond series I always pictured slightly retro covers with the feel of 30s adventure stories (something like the Indiana Jones posters) with great illustrations. The British publishers (Puffin) were worried though, that the books would look old-fashioned and scare kids off. I was very pleased with the Puffin covers, and still am, but it’s fantastic to see the new American cover of DOD which has all the romance and atmosphere I imagined when writing the books. DOD is a new start for Young Bond in the states and I’m very excited about its release. I never cease to be amazed at just how good Kev Walker’s illustrations are.”


Double or Die will be published by Hyperion Books for Children on April 22, 2008. An unabridged U.S. audiobook from Random House is also scheduled for release on the same day.

This post originally appeared on The Young Bond Dossier.
Posted by John Cox at 8:39 AM