Bond-Wilder rematch in the works? 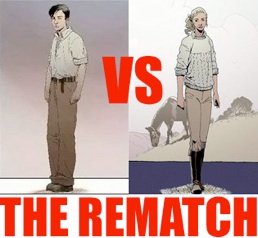 Yesterday Matt Weston alerted us to the possibility of Babushka’s return in a future Young Bond novel. Today he reports back with yet another clue found in The Young Bond Rough Guide to London to a retuning character; Wilder Lawless.

Of course, Wilder is the girl who rides a horse named Martini and throughly beat Bond in their infamous wrestling match in SilverFin (she beat him less so in U.S. edition which edited out all mention of Wilder’s “powerful thighs”).

Now in her Rough Guide character profile, it is noted that Wilder is a "free-spirited Scottish lass who helps Bond in SilverFin and looks destined to ride back into Bond's life."

Back into Bond’s life, eh? Now this could mean she’ll reappear in either books 4 or 5…or is it possible she’ll return in some future continuation novel when Bond is more, um, enthusiastic about Wilder’s penchant for getting physical?

(And if that sounds like I’m lobbying for a Young Bond Series II: The Fettes Years...I am. Because like the world, five books is not enough.)

Thanks to Matt Weston. Happy Easter everyone!
Posted by John Cox at 7:16 PM