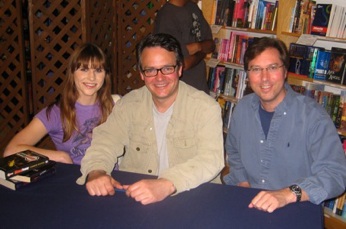 The news from Z at IFP headquarters in London was grim; Charlie Higson would not be making a stop in Los Angeles during his Blood Fever U.S. book tour. However, he would be appearing in Menlo Park, 25 miles from San Francisco and 400 from our front door. So what's a self-respecting Bond fanatic to do? Easy. Shirk all responsibilities and make a mid-week road trip North!

09:00 Hours: We packed a bag, filled a coffee thermos, bid a tortured goodbye to “Super Mega Kitty” (her first night “home alone”), and rolled out of the Hollywood Hills as the LA traffic was just breaking up for the day.

The drive along Hwy 101 north was spectacular; mostly coastline, farmland, and rolling hills which, at this time of year, are covered in wildflowers. Six hours later the GPS told us to exit and we found ourselves in Menlo Park. We surveilled the bookstore...yep, it was there...then found a room at the Red Cottage Inn. We choked down two nasty microwave burritos for strength, then settled down to lie in wait. It wouldn't be long now… 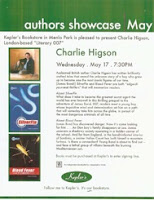 19:00: The first surprise of the evening greeted us on entering Keplers bookstore (a very nice independent bookstore located in the heart of Menlo Park). Even though the book isn’t due out until June 1, the store had a cart filled with copies of the U.S. edition of Blood Fever. In the internet age, I didn't think I’d ever again "discover" the new Bond novel inside a bookstore. It was old school, baby!

Of course, being a collector, this brought back an old crippling dilemma. I remember in 1986 trying to find an acceptably “Mint” copy of John Gardner’s Nobody Lives Forever. It took a dozen copies and two stores and I still look at that copy on my shelf with scorn. Happily, I'm more mature now—I have a girlfriend to do this for me! I told Athena to just grab me what looks like a nice copy, don't even let me have a choice. She did, saving me from myself. (Okay, maybe I did go back once or twice to check her work).

Almost all seats were filled and I was pleased to see a large turnout of children. Yes, the Young Bond series is clearly hitting its target audience beyond adult nerds like myself. Charlie appeared at 7:30 to applause. 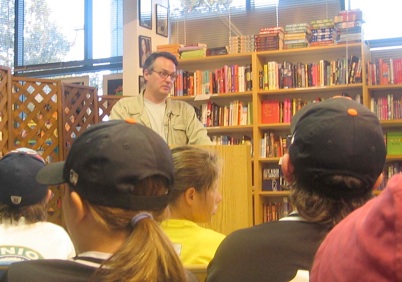 Charlie started his talk by talking a poll, asking who was your favorite Bond. Athena and I tossed in our votes for good old Roger, while Charlie confessed to being Connery man. The author then explained how he came to write the Young Bond novels, making a joke about how he was called into a top secret boardroom with a large table filled with other writers—he pulled a lever and the other writers dropped through the floor. 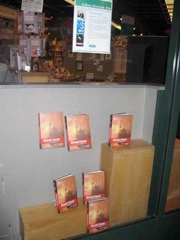 Charlie then read from Bond’s obituary in Ian Fleming’s You Only Live Twice, explaining how it was all he had to go on as far as Bond’s past. He also read a passage from SilverFin in which James first introduces himself a “Bond, James Bond.”

One interesting moment came when Charlie spoke about how the formal Eton school uniform harkened to Bond’s classic look. Without mentioning a tuxedo, he asked anyone to describe James Bond, “how he looks on a poster.” A young boy in the audience described Bond as being dressed in a dark jacket, white shirt...and open collar!

I leaned over and told Athena that the boy is describing the Die Another Day poster – but, also, in America, Bond has not been depicted on a poster in his full tuxedo since 1987s The Living Daylights. I wondered if Charlie would find it odd that during his U.S. tour children would not associate Bond and the tuxedo as strongly as would children in the UK. Happily, we have Bond back his full tux on the Casino Royale teaser, but I digress.

Charlie then opened up the floor to questions, and they came fast and furious. That same young boy who answered the tuxedo question clearly knew his Young Bond and asked if the SilverFin injection is what created the Bond we know today. This was actually something I wondered after first reading SilverFin, and something I asked Charlie in our 2005 interview. Charlie said he never intended that to be the case--the injection wears off (like steroids)--but he said people could think what they like. He then chuckled at the idea of James Bond being what he is today because he was “injected by some nut” when he was boy. (But I confess, I kind of like this idea.)

Charlie was forthcoming with Book 3 information, although with Blood Fever being “new” to this U.S. audience, there were less questions about what’s coming next. He said they’ve yet to decide on a title, but confirmed the London location and the fact that it deals with early computers. He seemed especially excited about this next novel because of the London setting. He lives in London and described himself as a real London buff (although I don’t think he used that word). As with John Gardner’s Icebreaker, it seems Charlie is merging his own passions with the Bond universe for his third novel, and this usually results in an author’s best work. 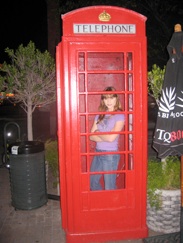 Charlie also revealed some yet unpublished Book 3 info--that the villain would be using a special weapon called an Apache (a real weapon of the time). Charlie said it was as close to a “gadget” as the series has yet to see. He also said Book 4 was probably going be set in Mexico. The “probably” gave me pause -- we’ve all jumped on Mexico as the location of Book 4 after Charlie mentioned it at a recent London signing, but maybe nothing is certain until words are on the page? Book 4 has already gone through one location change (from The Alps).

Following the Q&A, the attendees lined up to have their books signed. Athena and I hung back until the end, and it was then I received my second surprise of the night.

As we stepped up and said our hellos, Charlie said, “I have something for you.” He then pulled out a copy of the Chinese SiverFin. This was an edition I had never seen and didn’t know existed! Charlie said it was the least he could do, seeing as we drove all that way. I gushed many thanks as Charlie signed our copies of Blood Fever. Athena and I then took a picture with him (Athena’s “ritual” – check her website for many pics of her with Bond celebrities).

We bid our final thanks and goodbyes and set out for a proper dinner at Palermo, a very nice Italian restaurant adjacent to the bookstore in the Menlo Center. All in all, a terrific event and a memorable evening. 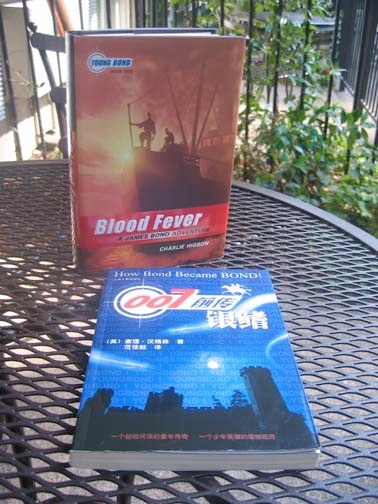