Dynamite announces REFLECTIONS OF DEATH for 2020

Dynamite has announced a new original James Bond graphic novel for release early next year called Reflections of Death. Below is the cover art by Fay Dalton, which beautiful evokes the 1970s Bantam covers, and the official press release. 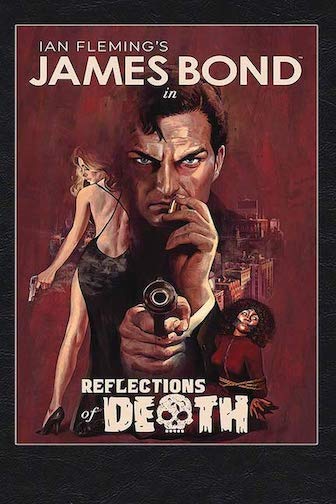 James Bond in "Reflections of Death" is a 128 page hardcover of nonstop thrills and intrigue. Several Dynamite Bond veterans return for this tapestry, including Benjamin Percy, Andy Diggle and Greg Pak and the writers of the December-launching new ongoing series, Vita Ayala & Danny Lore. Stars of both Dynamite and comics at large Gail Simone and Mark Russell join the team as well. Artists enlisted for the mission include Luca Casalanguida, Robert Carey, Jordi Perez, Dean Kotz, Eoin Marron and Kewber Baal. All wrapped up in another beautiful noir and pulp flavored cover by Fay Dalton.

With a framing story Ayala and Lore, over 20 total creators will collaborate to contribute stories that both stand on their own and tie into an overarching narrative. The central figure through the anthology of case files is Moneypenny. She's been kidnapped. and the mystery of her captors and their demands will only be revealed when, or if, 007 is able to complete his missions. While Moneypenny herself may have some surprises up her sleeve.

"We're incredibly fortunate to work with so many talented creators, and of course they all want to write one of the most crucial characters in modern fiction!," said Nick Barrucci, Dynamite CEO and Publisher. "Just in time for the new movie, for fans to enjoy a bounty of Bond too!"


You can pre-order Reflections of Death at Amazon.com and Amazon.co.uk.
Posted by John Cox at 12:37 PM