Rare bookseller Peter Harrington is offering an astounding collection of rare Ian Fleming James Bond books and memorabilia for a cool £2.5 million (over $3 million U.S.). Below is the press release. 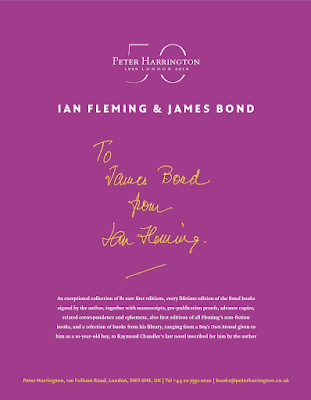 London — Peter Harrington, the UK’s largest rare bookseller, this year celebrates its 50th anniversary, and is thrilled to offer for sale an exceptional collection of Ian Fleming material for £2.5m, which it will be exhibiting at this year’s Masterpiece London. It is the most significant Fleming Collection to ever appear on the market and contains inscribed first editions of every James Bond book published in the author’s lifetime.

Amongst these inscriptions are some sensational associations:


The Collection also includes a number of manuscripts, pre-publication proofs, advance copies and ephemera, and a number of books from Fleming’s personal library. These include a notebook kept by Fleming on a trip to Japan, from which selected passages appear in You Only Live Twice, books from his childhood and a copy of Raymond Chandler's last novel inscribed to Fleming by the author.

Ian Fleming’s books about James Bond are perennially popular and there is an extremely enthusiastic fan base for both the books and the films. Continued interest is fuelled by the release of each new film, with Bond 25 (working title) the latest film, set for release early next year. An indication of the price trend of James Bond first editions can be seen with a particularly fine copy of Casino Royale which Peter Harrington has been lucky enough to sell four times in the past few years: for £22,000 in 2002; £26,000 in 2006; £30,000 in 2008; and in 2013, for £50,000.

It is remarkably rare to see a whole collection like this for sale, as they are usually broken up, and it will appeal to someone looking to acquire a complete and exceptional Fleming collection all in one go. This collection is the highest valued Peter Harrington has ever offered for sale. The 81 items come from a New York collector, who has been assembling the collection for over 30 years and it is offered for sale as a collection for £2.5m.

Pom Harrington owner of Peter Harrington Rare Books says: “The significance of this collection cannot be overstated. From typescripts which document Fleming’s creative process, to inscriptions which provide an insight into his personal life, few collections tell such a complete story about an author. We are extremely excited to be able to present it at this year’s Masterpiece fair, alongside a selection of other carefully chosen items.”

Masterpiece London takes place in the grounds of the Royal Hospital in Chelsea from Thursday 27th June until Wednesday 3rd July and is open daily from 11am until 7pm on Friday 28th, Saturday 29th and Sunday 30th June and until 9pm on all other days.

Thanks to Raymond Benson.
Posted by John Cox at 11:16 AM