SHAKEN: Drinking with James Bond and Ian Fleming has been released in the UK. 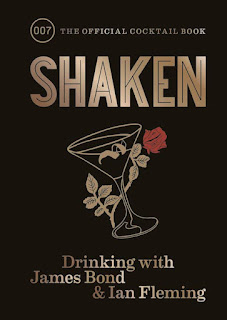 Cocktails are at the glamorous heart of every Bond story. Whether it's the favoured Martini, which features in almost every book, or a refreshing Negroni or Daiquiri, strong, carefully crafted drinks are a consistent feature of the Bond novels. Recipes are divided into five categories: Straight Up; On The Rocks; Tall; Fizzy; and Exotic. Sip on inventions such as Smersh, Moneypenny, That Old Devil M and Diamonds are Forever, as well as classic Bond cocktails such as the Vesper and, of course, the Dry Martini. Each recipe is accompanied by extracts from Fleming's writings - be it the passage where the classic drink was featured or a place, character or plot that inspired one of the drinks.
Also features Ian Fleming's writings on whisky, gin and other spirits.


You can purchase SHAKEN: Drinking with James Bond and Ian Fleming at Amazon.co.uk. You can also buy via marketplace sellers on the U.S. Amazon.com.
Posted by John Cox at 10:10 AM