After being delayed, Dynamite's adaption of Ian Fleming's Casino Royale is now due out October 17, 2017 [see UPDATE]. The Amazon listing also shows cover art, but notes that "Final Cover May Vary." Below is part of the official press release. 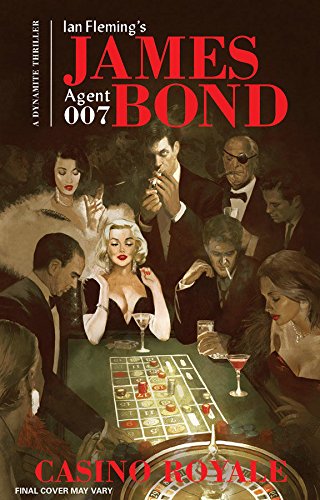 Award-winning writer Van Jansen and artist Dennis Calero  have been selected as the creative team to bring the very first James Bond novel, Casino Royale, to the pages of comics for the first time in the series' history. Set for release in October, the 160-page graphic novel will transport 007 fans back to the 1950's with its stylish artwork and classic story!

Writer Van Jansen says, "There's a very obvious reason why I wanted to tackle the adaptation of Casino Royale: because it's James damned Bond! Also, when I cracked open Ian Fleming's first 007 novel (I had read it years before), it immediately appealed to me as a great creative challenge. Fleming's prose is powered by his descriptive punch, an eye for detail that captures the post-World War II time period in full color, from decadent meals to the intricacies of baccarat to the sinister machinations of Le Chiffre. It's a heady book, diving deep into the character of Bond. Adapting it into comic book form meant creating some fun new approaches to storytelling, to recast a familiar tale as something that hasn't been seen before. Also, it's James damned Bond!"

UPDATE: The above cover art has now been removed from Amazon and the release date keeps getting pushed back. At the moment, Amazon shows December 26, but don't be surprised if it gets pushed back to sometime in 2018. I'll report when it's finally released.