"For the synopsis it was named On Moscow's Orders as a counterpoint to Charlie Higson's By Royal Command. Then the first draft it was called Dance With Death, which ultimately felt too generic. [...] I made a list of possible titles and Red Nemesis really seemed to sum it up, the idea how importantly dangerous the Soviet Union will figure in Bond's life. It also syllabically matched book three, Strike Lightning, just as Heads You Die matches Shoot To Kill. So that appealed to the nerd in me." 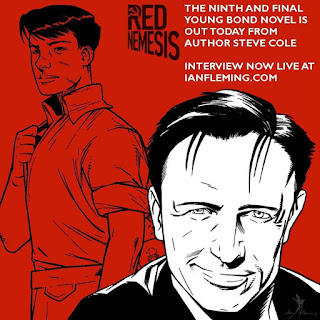 Red Nemesis is available in the UK in paperback and as a limited hardcover. The hardcover edition can also be found on the U.S. Amazon.
Posted by John Cox at 10:21 AM