FROM RUSSIA WITH LOVE turns 60

Ian Fleming's From Russia With Love celebrates its 60th Anniversary this month (first published April 8, 1957). To mark the occasion, Ian Fleming Publications has released this anniversary image and is holding a special competition. Details below. 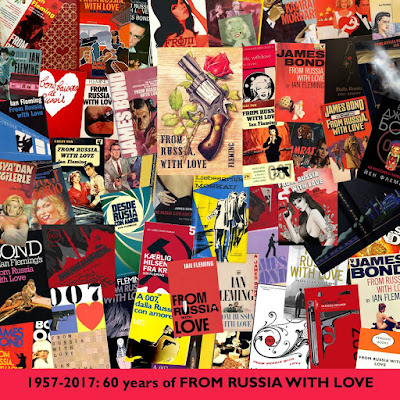 First published in the UK on the 8th April 1957, Ian Fleming's legendary James Bond thriller FROM RUSSIA WITH LOVE is 60 years old today!

The novel, famous for its inclusion on President Kennedy's top ten book list, has been published and enjoyed all over the world, with many fans citing it as their favourite Fleming thriller.

With its unforgettable sequences on the Orient Express, in the backstreets of Istanbul and in the dark corridors of the SMERSH headquarters, we're very pleased to announce this anniversary and encourage readers old and new to delve into the pages of this 50s classic.