In 1989, Eclipse would attempt to revive the long dormant world of James Bond comics with Permission To Die, an original James Bond "graphic novel" written and illustrated by Mike Grell. While the first two issues were released in 1989, the concluding issue # 3 would not appear until 1991. A rare collected edition was published in 1992.

In Permission To Die, Bond battles Dr. Erik Wiziadio who seeks to destroy Victoria, British Columbia to prove the need for world disarmament. The Bond Girl is Edaine Gayla and locations are England, Hungary, Austria, and Idaho (yes, Idaho).

The story contains some interesting nods to the films and continuation novels. Bond drives the Aston Martin DB5 (six years before the DB5 would return in GoldenEye). He also uses the John Gardner-era ASP 9mm handgun. Grell always claimed that his model for 007 was based on Hoagy Carmichael, whom Fleming once said was his visual idea of what James Bond looked like.

Eclipse would also release an adaptation of Timothy Dalton's 1989 Bond film Licence To Kill,  illustrated by Grell. Writing duties were handled by Richard Ashford. Published in a magazine size hardback and paperback, it’s been said that Dalton would not allow his likeness to be used, so a generic Bond was used.

Licence To Kill and Permission To Die would be the only Bond comics from Eclipse. 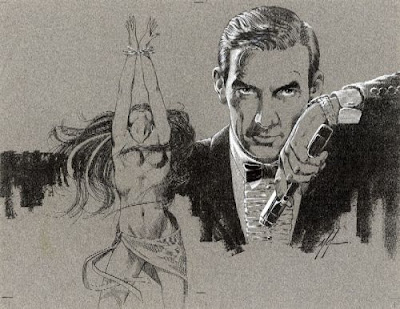