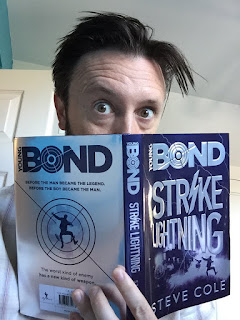 Author Steve Cole says tomorrow he'll be signing copies of the limited hardcover edition of his next Young Bond novel, Strike Lightning. As with Heads You Die, the hardcover will include bonus content.

Publisher Penguin Random House has given me a preview of book's prologue titled, "The Dead Land." It contains a murder in the Scottish countryside, a German villain name Mr. Blade, and a mysterious super weapon called "Steel Shadow."

Strike Lightning will be released in the UK on September 1, 2016. You can pre-order the limited hardcover and paperback at Amazon.co.uk.

UPDATE: You can now read the prologue for yourself at the official Young Bond website.
Posted by John Cox at 8:08 PM