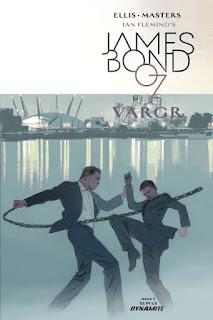 Dynamite's James Bond VARGR #5 is released today (delayed a week from its original March 2 release date). This is the fifth installment in a six part graphic novel series by Warren Ellis and Jason Masters.

Bond is locked in a death trap in a medical lab in the middle of Berlin, London is going into meltdown as poisoned drugs are turning homes into abattoirs, and the only way to save Britain is the secret of someone or something called... VARGR.


You can purchase VARGR #5 at the Dynamite website. The sixth and final installment will be released on April 20.

UPDATE: Looks like this is delayed again until March 16.
Posted by John Cox at 4:20 PM