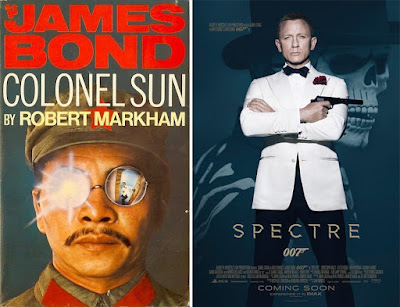 The official Ian Fleming Publications website reports that the new James Bond film SPECTRE, which had its Royal premier in London on Monday, features a pivotal scene from the first 007 continuation novel Colonel Sun by Kingsley Amis. I've not yet seen the movie (U.S. release is November 6), so I don't know what that scene is, nor does IFP reveal it. They just tease:

The Colonel Sun scene which features in SPECTRE is one of pivotal importance both to the film and the book and fans are encouraged to identify which part stems from Amis’ pen.

Corinne Turner, Managing Director of Ian Fleming Publications Ltd. commented that "The Fleming family and The Kingsley Amis Estate hope that fans of SPECTRE will be encouraged to reach for this thrilling book by one of the finest writers of the 20th century."

Colonel Sun was recently reprinted by Vintage Books in the UK and is available from Amazon.co.uk.
Posted by John Cox at 10:42 AM