Here's another literary tie-in with the new James Bond film. James Bond: Spectre: The Complete Comic Strip Collection will be released by Titan Books in the UK on October 23 and in the U.S. on November 24. The book will include a forward by SPECTRE screenwriter John Logan. Notice how the cover art uses a similar background color as the SPECTRE poster? 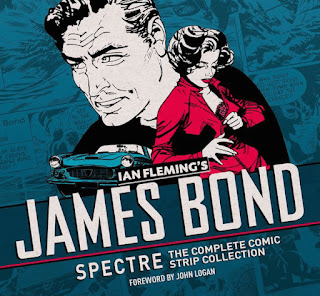 The daring James Bond is back, this time in a lavishly put together collection celebrating the iconic SPECTRE storylines. Featuring Thunderball, On Her Majesty's Secret Service, You Only Live Twice and The Spy Who Loved Me. These fully restored and thrilling stories are based on the original Ian Fleming James Bond novels.


Wait, The Spy Who Loved Me a SPECTRE story? Well, yes. The criminal organization was written into the original Daily Express comic strip from which these Titan collections are composed.

SPECTRE also played a large role in the Daily Express continuation Bond strips throughout the 1970s with the organization being run by a female Blofeld know as "Madame Spectra."