Here's some great news. Vintage will release Colonel Sun by Kingley Amis with cover art that matches their recent Ian Fleming paperbacks. This is the first reprint of Colonel Sun since 1995, and it's always exciting to have this first continuation novel as part of a current set of Bonds. 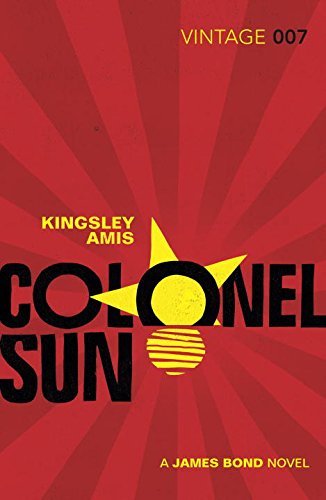 The first ever Bond continuation, originally published by Jonathan Cape in 1968, now finally back in print and published to coincide with the forthcoming Bond film Spectre.

Lunch at Scott's, a quiet game of golf, a routine social call on his chief M, convalescing in his Regency house in Berkshire - the life of secret agent James Bond has begun to fall into a pattern that threatens complacency … until the sunny afternoon when M is kidnapped and his house staff savagely murdered. The action ricochets across the globe to a volcanic Greek island where the glacial, malign Colonel Sun Liang-tan of the People's Liberation Army of China collaborates with an ex-nazi atrocity expert in a world-menacing conspiracy. Stripped of all professional aids, Bond faces unarmed the monstrous devices of Colonel Sun in a test that brings him to the verge of his physical endurance.

Colonel Sun will be released on October 15 and can be pre-orded at Amazon.co.uk.

Thanks to Dylan Green and Leigh Burne for the alerts.
Posted by John Cox at 6:22 AM