Are you into Bondage?

Bondage was the official magazine of the James Bond 007 Fan Club (not to be confused with the James Bond International Fan Club, publishers of OO7 Magazine). The "American club" — as it was called back in the day — was run by Richard Schenkman from 1974 to 1989.

While Bondage never grew as thick nor as slick as its overseas counterpart OO7, its content was always first class. In the pages of Bondage you could find lengthy in-dept interviews with such Bond luminaries as Cubby Broccoli, Michael G. Wilson, George Lazenby, Timothy Dalton, Tom Mankiewicz, John Glen, and John Gardner. The magazine published several Ian Fleming short stories that had never been published in America, and one of its major contributors was the yet-to-be-named continuation author Raymond Benson. The club and magazine served Bond fans for 15 years, and within the pages of Bondage are facts and photos found nowhere else.

Today back issues of Bondage are hot collectibles. While issues 1 to 7 are exceedingly rare, the remaining ten issues can be found at reasonable prices. But which issue contains that choice interview or story that you simply must have?

To help you on your search, here is a complete checklist bibliography of Bondage magazine — the covers, the content, and some choice news and rumours that didn’t always turn out to be true. Happy hunting. 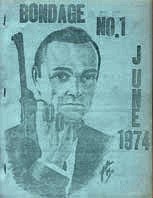 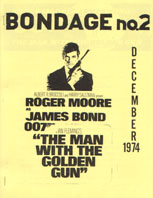 REPORT: The Man With The Golden Gun – Cubby and Harry have done it again!
LOCATIONS: A report on filming The Man With The Golden Gun in the Gulf of Siam, Hong Kong, and Bangkok.
AT THE STUDIO: The Man With The Golden Gun at Pinewood and the huge Solar Energy Plant set.
SPECIAL NOTE: Eon Productions tells the club that the next Bond film will not be Moonraker as reported in issue #1, but The Spy Who Loved Me.
SOME FACTS ON THE STARS: Roger Moore, Christopher Lee, and Herve Villechaize profiled.
BONDED RECIPES: “Scrambled Eggs James Bond” (from 007 in New York).
WHERE ARE THEY NOW? Sean Connery is now filming Murder on the Orient Express.
MISC, QUIZZES, HOW TO JOIN THE CLUB. 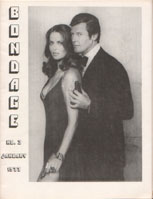 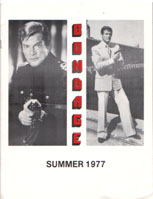 THE BIG NEWS: While Octopussy and Moonraker were also being considered, it has been decided that For Your Eyes Only will be the next Bond film.
MUSIC: Marvin Hamlisch and Nobody Does It Better.
HISTORY: Portrait of M by Robert Forlini.
ARTICLE: The Women of The Spy Who Love Me.
LITERATURE: The Little-Known Ian Fleming/James Bond Short Stories by Saul Fischer.
SPECIAL STILL PICTORIAL: Connery meeting the Queen at the You Only Live Twice premiere. Roger Moore workout for The Man With The Golden Gun.
OPINION: Roger Moore in Bond’s Future? by Richard Schenkman.
VEHICLES: Getting around in Spy, a look at the Lotus and the wetbike.
BONDED RECIPES: Green Street Spaghetti. 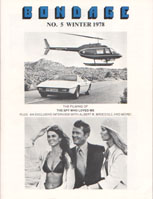 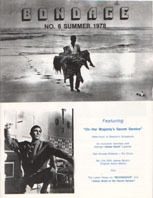 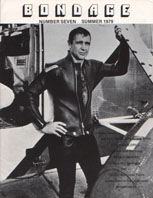 CLUB MEMBERS NOTICES: Club Moonraker coverage will appear in the new sci-fi magazine, Questar.
INTERVIEW: Q&A with Kevin McClory by Richard Schenkman.
FAN ART: Club Member Artwork.
PICTORIAL: Moonraker.
CLUB MERCHANDISE
ARTICLE: James Bond in the Classroom by Fred R. Eicheiman, Ed.D.
ARTICLE: The Spy Who Lived Twice by Saul Fischer. A comparrison of the many similarities between The Spy Who Loved Me and You Only Live Twice. 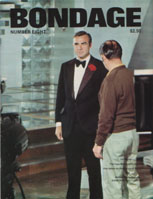 CLUB MEMBERS NOTICES: Pics of club members personalized 007 license plates.
INTERVIEW: Q&A with screenwriter Tom Mankiewicz by Richard Schenkman.
BOND BOOKSHELF: Colonel Sun, The Book of Bond, and The James Bond Dossier.
ARTICLE: Moonraker From Book to Film by Andy East.
HISTORY: On the Set of Diamonds Are Forever by Robert Short.
ARTICLE: Ken Adam Talks About the Production Design of Moonraker.
FAN FILM REPORT: The Spy Who Did It Better by Mark Pirro.
BOOKS: Writing The James Bond Films: A Behind the Scenes History by Steve Rubin.
INTERVIEW: An Exclusive Interview With “James Bond” by Danny Biederman.
TRVIA: The James Bond Quizbook. 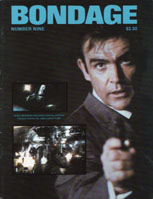 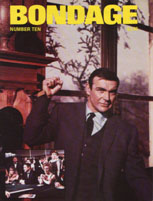 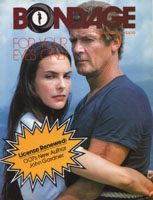 INTERVIEW: John Gardner: A talk with the man holding James Bond’s literary license by Richard Schenkman.
INTERVIEW: For Your Eyes Only press junket coverage by Richard Schenkman. Q&A interviews with: Topol, Julian Glover, Sheena Easton, Maurice Binder, Robbin Young (flower shop girl), Cubby Broccoli, and Roger Moore.
MERCHANDISE: For Your Eyes Only posters.
QUIZ/GAMES: The 007 Night Spot.
MUSIC: Twisting with James
BOOKS: Publish or Perish: Writing The James Bond Films: A Behind the Scenes History by Stephen Jay Rubin.
ARTICLE: The strange case of the two prettiest women in For Your Eyes Only…one who wasn’t in the film and the other was a man! 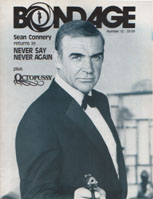 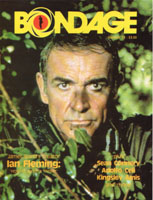 LITERATURE: “How To Write a Thriller” by Ian Fleming. Amazing article by Fleming from 1962. Illustrated by George Almond.
INTERVIEW: A Dialogue with Kingsley Amis by Raymond Benson (infamous interview in which the author of Colonel Sun trashes the first two Gardner novels.)
REPORT: HOLLYWOOD! Picture coverage from both the premieres of Octopussy and Never Say Never Again.
HISTORY: On the Set of Diamonds Are Forever by Danny Biederman.
MERCHANDISE: Final chance to get the August Halle Productions gunbarrel lithograph.
INTERVIEW: The Adolfo Celi Interview by Piero Corsini. 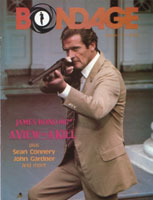 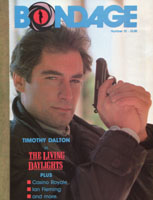 HISTORY: Casino Royale: The Forgotten Bond by Leonard Thomason.
REPORT: On the Set of The Living Daylights: A Reporters Notebook by Richard Schenkman.
INTERVIEW: A Conversation with Timothy Dalton by Richard Schenkman.
REPORT: SOLD! A report on the sale of the Aston martin DB5 by Raymond Benson.
LITERATURE: “Treasure Hunt in Eden” by Ian Fleming. Part One: Pirate Gold. (Story written by Ian Fleming in 1958 printed here in American for the first time.)
BACK ISSUES. 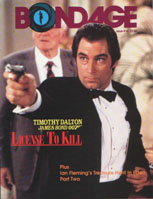 LITERATURE: “Treasure Hunt in Eden” by Ian Fleming. Part Two: Butterflies and Beachcombers. Illustrated by George Almond.
MUSIC/BOOKS: The Soundtracks to the Novels by Raymond Benson. Researched by Mark Atkins. (A terrific examination of the music contained in the works of Ian Fleming.)
REPORT: Report from the Set of License To Kill by Richard Schenkman.
INTERVIEW: Timothy Dalton Revisited by Richard Schenkman. (Interview contains pics of cuts scenes, and an ominous prediction by Dalton that he “has a feeling” that Licence To Kill will be “the end of the lot.” Not just his last Bond…but the last Bond altogether!) 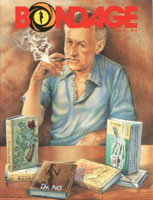 TELEVISION: Fleming’s Life Depicted in Goldeneye. Report on TV movie starring Charles Dance.
LITERATURE: “Treasure Hunt in Eden” by Ian Fleming. Part Three: Gold or No Gold?
TELEVISION /HISTORY: Ian Fleming’s Other Spy by Jon E. Heitland. (A look at Ian Fleming’s involvement in the creation of Napoleon Solo and The Man From U.N.C.L.E.)
INTERVIEWS: Chatting at the Plaza. Press junket interviews with John Glen and Talisa Soto from Licence To Kill (with a promise that other interviews would appear in Bondage #18).
LOCATIONS: Everyman His Own 007 by Richard Schenkman. (Terrific collection of fan photos and remembrances of visiting Bond sets and Bond locales.)
INTERVIEW: A Visit to the James Bond Classroom. Raymond Benson interviews Michael G. Wilson and director of publicity Saul Cooper.
BACK ISSUES & BOOKS.

This first appeared on CommanderBond.net.
Posted by John Cox at 8:00 AM