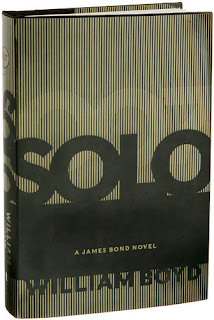 William Boyd's new James Bond novel Solo is released today in the U.S. and Canada by Harper Collins. The new book finds 007 in action in West Africa and Washington, D.C. (which makes Solo the first Bond novel since 1998's The Facts of Death by Raymond Benson to have an American setting).

Solo is the third installment in IFPs series of continuation James Bond novels by established authors. These books have experimented with the James Bond timeline -- Sebastian Faulks' Devil May Care was set in 1968 while Carte Blanche by Jeffrey Deaver rebooted Bond into 2010. Boyd's novel is firmly rooted in the Fleming timeline (explained in a foreword) with the action taking place in 1969.

I'll be posting a full review of Solo later this week, but know that this is a remarkable Bond book, the likes of which we have not seen for a very long time. For many of us, this is the James Bond book we've been waiting for.

William Boyd will not be doing a U.S. book tour, but he will be doing a signing event in New York City. I'll post details on that as soon as a get them.*

You can purchase Solo as a hardcover, audiobook, a large print paperback, or as an eBook from Amazon.com.

UPDATE: It looks like William Boyd did his signing event at The Mysterious Bookshop in New York City.
Posted by John Cox at 8:23 AM