NEW JAMES BOND BOOK TITLE TO BE REVEALED ON MONDAY 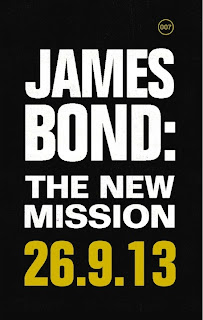 William Boyd will announce the title of his forthcoming James Bond continuation novel at The London Book Fair this Monday, April 15, at 11:30am.

The announcement will be part of The Author of the Day event at the English PEN Literary Café. Invited press will have a brief opportunity to ask questions of William Boyd about the choice of title. A book signing will follow the event.

"I’m both delighted and honoured to be one of the Authors of the Day at The London Book Fair," says Boyd. "It’s a rare and rather wonderful pleasure to find oneself for a few hours at the very centre of the international publishing industry and LBF always provides the warmest of welcomes to writers."

A press release officially announcing the title will follow at midday. Of course, I will get the new title up here on The Book Bond ASAP.

William Boyd's James Bond novel will be released by Jonathan Cape in the UK on September 26, 2013 (Amazon.co.uk) and by HarperCollins in the U.S. on October 8, 2013 (Amazon.com).

Thanks as always to Four Coleman-Getty.