DIAMONDS ARE FOREVER manuscript sells for £97,250 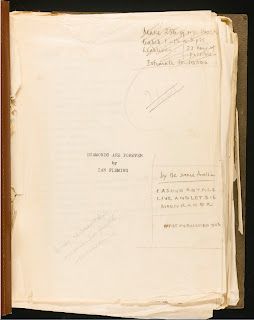 An original manuscript for the James Bond novel Diamonds Are Forever with Ian Fleming's handwritten corrections sold for £97,250 ($158,000) at Sotheby's auction of "English Literature, History, Children’s Books & Illustrations" on December 12.

The manuscript had been owned by Fleming's typist, Ulrica Knowles, and had remained in her family until 2008. According to the auction, among the many revisions in the manuscript is the fact that the book's hoodlum "Dolly" Kidd is called "Boofy" Gore throughout (the name was changed following the objection of Fleming's former schoolfriend from whom the name was taken).

Diamonds Are Forever was Ian Fleming's fourth James Bond novel and was first published by Jonathan Cape on March 26, 1956.
Posted by John Cox at 8:38 AM