SKYFALL is an all-time high 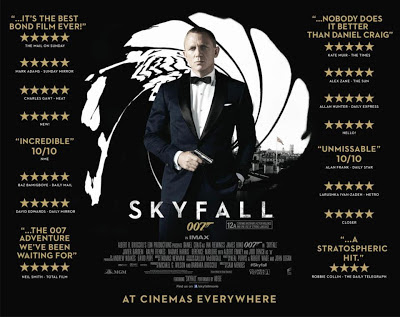 I know I didn't post anything about the release of Skyfall, the 23rd James Bond film, but did I really need to? I don't think this one was going to slip past any Bond fan.

The film is doing stellar box office -- it's already the second highest grossing movie of all time in the UK and was #1 in the U.S. opening weekend. I've seen the film twice and the only word I can come up with is miraculous. It's just a miracle of a Bond movie -- I can't believe it can still be this good. Congrats to Danjaq and all the creators of Skyfall for keeping The Movie Bond at the top of his game.

But I'm still bummed we didn't get a novelization.
Posted by John Cox at 8:55 AM