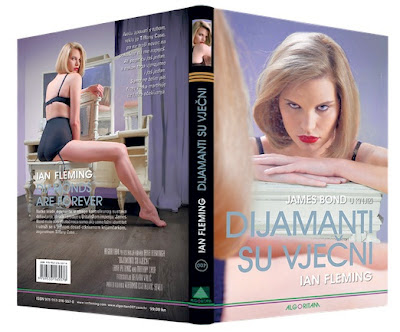 ZAGREB, October 3, 2012 – “I knew you all expected Mr. Bond to show up for his promotion,” said David Slinn, Her Majesty’s Ambassador to the Republic of Croatia, “but he is currently at an undisclosed location, performing undisclosed duties.” His excellency was addressing an audience of some hundred people, gathered in good cheer at the Café Kinoteka in Zagreb on September 19th for the unveiling of the first Croatian edition of Ian Fleming’s Diamonds Are Forever, joining numerous Olympic and Paralympic athletes freshly returned from their successes at the 2012 London Games.

The UK Embassy and the Bond publisher, Algoritam, used the opportunity to not only present a classic Fleming title to the local audiences, but to also congratulate the athletes on the Olympic achievements that inspired the nation. Mr. Slinn was joined on the stage by Vladimir Cvetković Sever, the imprint’s editor, translator and creative director, and Lana Petanić, who portrays the book’s indefatigable female lead, Tiffany Case, on the cover. The assembly was greeted by Fergus Fleming, the Chairman of Ian Fleming Publications Ltd., in a letter which stated, “This latest volume is a splendid addition to the annals of Agent 007, and I wish it every success.” It was the fifth in a unique line of Ian Fleming Bond covers which Algoritam has been producing, under license from IFP, since 2008.

“The challenge for this cover,” said Cvetković Sever, “was to connote the brilliance and timelessness of diamonds without depicting any, as Tiffany Case does not wear them in the story. So it was a stroke of good fortune when we secured Lana’s participation. She is not only one of Croatia’s top models, but her looks easily rival those of any currently working supermodel anywhere in the world. With Lana aboard, we had our diamond, cut and polished; we could concentrate on the character she so fully embodies.”


This restrained approach extended to the photographer. As luck would have it, Belizar Valić has had prior experience working with Petanić in various fashion editorials over the years. The Diamonds Are Forever cover photoshoot marked one of his rare returns to the kind of work he loved to do before turning his full attention to Sonic Models, the modelling agency which he runs with his partner and this book’s stylist, Iva Tuđa. “Early on, Vladimir decided to depict the iconic Tiffany Case scene, the introduction of her character as she gazes in the mirror of her dressing table, wearing black lingerie, while Feuilles Mortes plays in the background,” said Valić. “He drove us crazy with that song, in half a dozen different covers ranging from Yves Montand to Iggy Pop! But it certainly helped create the mood. Lana had a lot of Tiffany in her, and she was able to pull off the character’s emotion without any extraneous help from my lighting. In creating a character that is designed to have only two or three photos to exist in, I let her face tell the story, while concentrating on simply staying true to her portrayal.”

The final cover design depicts Case in a very feminine purple room, its dilapidation suggested only by the state of the dressing table mirrors and its rough surfaces. Staring into her own eyes on the front cover, she notices an imaginary Bond and begins to turn on the spine thumbnail, revealing her full figure to the reader’s gaze only on the back cover. “Years ago, a Croatian stylist referred to Lana’s legs as belonging to the Aston Martin class,” noted Cvetković Sever. “I learned of his comment much later, but I found it more than fitting – and true – once she became a Bond Girl.”

The result is the softest and most feminine of the five Bond covers produced in Croatia so far, true to every aspect of Ian Fleming’s prose – from the gaudy setting of the fictional Trafalgar Hotel to the chatoyance in Tiffany’s eyes – while capturing both the period and the continuing appeal of the original text. “I’ve had people comment on how perfectly these images capture the fifties, or the seventies, or the eighties look,” added Cvetković Sever wryly. “That is the true beauty of the original Bond Girls – they belong to every era. Due to Ian Fleming’s insistence on a natural, timeless look, with little makeup, simple hairstyles and no nail varnish, these ladies have lived on as symbols of grace, courage, determination and fortitude in the pages of his prose. Despite being grounded in their time and place, they go on forever. And each model we’ve had the fortune to work with has embodied her own character flawlessly, while putting her own unique spin on it; it is our hope that in presenting the first flesh and blood Bond Girls as written, we have hewed as closely as possible to Ian Fleming’s mental image of them.”

Despite being one of the fastest translators in Croatia – last year, he shared George R.R. Martin’s “gold medal” for producing the world’s first translation of his bestselling A Dance with Dragons – Cvetković Sever takes his time with the Fleming material, producing roughly one translation per year. “Simply put, these books are a labour of love,” he concludes. “Every pixel on their covers has to be just right, and so does every term and every comma in the actual text. Diamonds Are Forever had offered its readers their initial glimpse under the shady canopy of the illicit diamond trading, and that sorry business has continued to bring misfortune to Africa and every other part of the pipeline that Fleming so memorably began to depict.” “Alas, we didn’t actually have a Bond to put an end to these things in the mid-fifties,” added Petanić, who researched her role thoroughly. “There are other women living Tiffany’s life at this very moment, and we were all quite aware of that sobering fact as we worked on this cover.”

The first Croatian edition of Diamonds Are Forever is currently available in Croatian bookstores; the search for the perfect model to portray Tatiana Romanova in From Russia with Love has already begun.